Natural History of Southeast Alaska is a Semantic MediaWiki site created to serve as a comprehensive resource for subjects related to the natural history of Southeast Alaska. In practice, this includes links to other more general internet resources (including observation databases) and compilation within the wiki of other information, both from published print resources as well as unpublished or oral accounts from experienced naturalists in the region. It is hoped that the wiki will serve both scientists working in the field as well as amateurs interested in learning and sharing more about some aspect(s) of natural history in Southeast Alaska.

A page on the Greater White-fronted Goose, which includes a table of structured data

The wiki was started in June 2008 (replacing an smaller initial site built on Wordpress) as a hobby-project to support the primary developer/author's interest in learning more of the natural history of his home place. Still primarily authored (and entirely developed) by a single person (with some contributions from a handful of other contributors), it has grown slowly as pages are created for species that are either known to occur, or that could occur in Southeast Alaska, using both published resources as well as notes and observations from experienced observers in the region. These species pages are categorized into groups that are meaningful to the layman, though don’t necessarily hold together taxonomically. In addition, taxonomic organization is possible via the assignment of taxonomic groups to semantic properties. This allows allows the use of Semantic Drilldown to search both within the human categories (Terrestrial Invertebrate, Fish, Marine Invertebrate, Bryophyte, to name some examples) as well as taxonomically.

Currently there are over 4000 species pages in the wiki, all of similar format, though there are some differences based on the category. Currently the basic species page includes space for an overall summary, an accompanying picture, a section where local summaries for that species may be included, a set of links to external sites and/or internet references, and a gallery of photos that are in the wiki and have been tagged as being of and/or associated with the species. Variants of the basic structure include a table of seasonal occurrence which is included for each of the birds and special notes and maps for the bryophytes that were scanned (with permission) from a PhD dissertation on the bryogeography of Southeast Alaska. 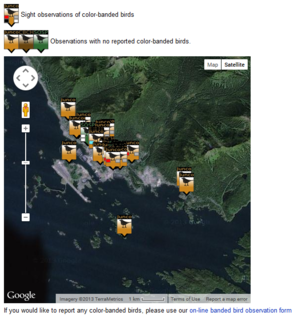 A map for the Sitka Bird Banding Project, powered by Semantic Maps and Semantic Compound Queries

In addition to the basic species pages, the wiki has been used to support the Sitka Bird Banding Project, including forms for entering observation data, as well as tables and maps summarizing reports of banded birds.

In addition to continuing work on the biodiversity related pages, future plans include developing pages related to the physical environment and interactions between it and the species that live in the region. These include such things as weather phenomena, locations and/or physical features, geology, and habitats. Using SMW, it is hoped that all these pages can be connected in a rich variety of ways mirror the relationships present between them in the natural world. Also of interest is greater integration with more general scientific databases. Perhaps using extensions such as External Data and Semantic Maps, it may be possible to create maps of interest for the region. 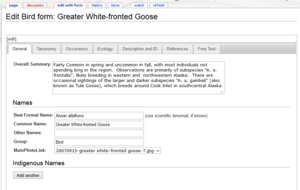 A form on the wiki, using Semantic Forms

Semantic MediaWiki is used extensively throughout the wiki. Almost all elements of a species page are saves as semantic properties. This allows for easy generation of annotated species lists, easy searching/navigation via Semantic Drilldown, and in the long run should make it possible to model and present much more information about the relationships between the various species as well as the physical environment.