Semantic MediaWiki rocks. You can do so much things with it , it's flexible, it can be very efficient, it has great community... but why isn't SMW as popular as Drupal or Joomla? Why nobody even knows about it? I'll try to analyze that here starting from the most obvious reasons to the most controversial.

There are actually only two problems:

The number of SMW users per months don't grow[edit]

The interest to SMW is growing less and less as you can see from this Google Trennds Plot:

The number of SMW developers and contributors don't grow[edit]

This data has been obtained from https://www.ohloh.net/p/smw 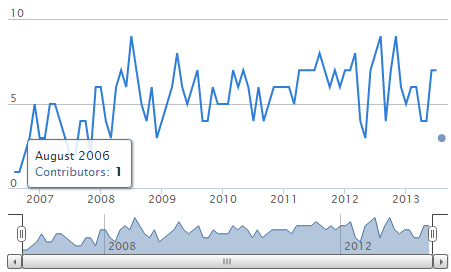 Lines of code is hardly a good metric to measure progress with. Functionality and code quality are --Jeroen De Dauw (talk) 18:23, 26 October 2013 (CEST)