The Traditional Tune Archive is a web-based information storing and retrieval tool dedicated to instrumental music of the past 300 years traditionally used for dancing in Ireland, Great Britain, and North America. It is a semantic system in which the meanings (semantics) of information are organized in a way that makes it possible for the web to “understand” and satisfy the requests of people and machines to use the content. Thus, the aim is to allow the semantics of traditional music pieces — their properties, historical information and musicological traits, commentaries, etc. — to be employed in an improved data structure that allows for myriad research possibilities.

People using the Traditional Tune Archive can navigate the story of a traditional tune (e.g. following the different titles in which the tune is also known); can get the ABC music notation code of the tune; can see the score and read anecdotal information.

Why there is a need for the Traditional Tune Archive[edit]

Although we are not trained musicologists and make no pretence to the profession, we have tried to apply such professional rigors to this Semantic Web as we have internalized through our own formal and informal education.

This demands the gathering of as much information as possible about folk pieces to attempt to trace tune families, determine origins, influences and patterns of aural/oral transmittal, and to study individual and regional styles of performance.

Many musicians, like ourselves, are simply curious about titles, origins, sources and anecdotes regarding the music they play. Who, for example, can resist the urge to know where the title Blowzabella came from or what it means, or speculating on the motivations for naming a perfectly respectable tune Bloody Oul' Hag, is it Tay Ye Want?

Knowing the history of the melody we play, or at least to have a sense of its historical and social context, makes the tune 'present' in the here and now, and enhances our rendering of it. 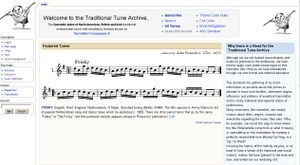 The Traditional Tune Archive was originally “seeded” with the entire project Andy Kuntz has been working on from 1996 to 2010, The Fiddler’s Companion tune index, in which tens of thousands of traditional melodies had been catalogued alphabetically by title into separate entries that also included descriptive information about the tune, including form, key, structure, fiddle tuning, source information, where it could be found in print and on sound recording. Additionally, Andy entered as much anecdotal information as he could find regarding how the tune was embedded in culture, its provenance, authorship, peculiarities, stories, and mention in the historical record, etc. — a potpourri of material about the tune, whether factual, speculative, apocryphal, hopeful or simply amusing.

What is SMW used for?[edit] 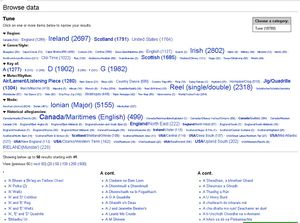 Migrating data from the Fiddler Companion to Traditional Tune Archive has allowed us to explore connections and relationships between different pieces of music that we never could have imagined, simply assigning properties to the tune itself and let the Semantic Web instruct the machine and do the rest.

Of course the use of the Extension "Page Forms", provided a friendly way to make the data entry; the Extension "Semantic Drilldown" an alternative way to search; the SMWAskApi the APIs for semantic querying the archive. See the Special:Version page of the Traditional Tune Archive for a complete list of Semantic (and other) extensions.

This site couldn’t have been made without Gregory Dyke and Paul Rosen's abcjs plugin. It is an open source JavaScript rendering engine for rendering abc music notation on web pages and can be used to transform a textarea into an abc editor, with scoresheet and audio, or as a plugin, rendering all the abc it finds on a page. We make large use of it, although some tune is rendered using lilypond when there is the need to show just a fragment of the score or for complicated score representations.

We needed a free, non-Java, open source engine with a variety of text processing features. Sphinx is a flexible and fast, full text search engine equipped with an excellent extension that incorporates the Sphinx engine into MediaWiki to provide a better alternative for searching. We chose to use an alternative for the obvious fact that the default MediaWIki search is far from being a sophisticated tool.

Please see the introduction written in 1996 for the Fiddler Companion website. As you can see, already there was the need for the Semantic Web.