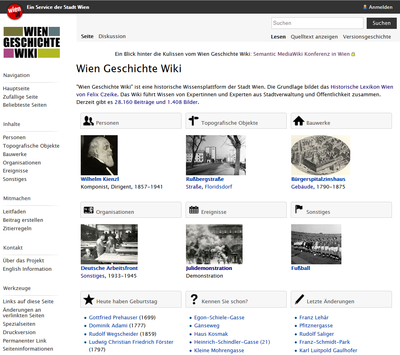 The Vienna History Wiki ("Wien Geschichte Wiki") is a wiki about the History of Vienna, Austria.

History of the wiki[edit]

It was built up by the Municipal and Provincial Archives of Vienna (MA8) and the Vienna City Library (MA 9). It was opened to the public in 2014. It is a geo-referenced, historical knowledge platform of the City of Vienna aiming at combining knowledge from the city administration with those of external experts.

Cornerstone of the wiki are more than 27,000 articles (31,000 entries) oft the six-volume encyclopedia „Historisches Lexikon Wien“ edited by Felix Czeike. The latest edition (2004) of the print version has been digitised (OCR). As the result could not be transferred automatically, students were hired to fill in content in the structure of the wiki.

The main content of the wiki are persons, buildings, topographical objects (streets, parks, waters, districts...), organisations, events and other items (such as special German expressions used in Vienna).

The following components were used:

All of the used software components were security checked by the Information and Communications Technology (ICT) department of the City (MA 14).

The Vienna City Library (department of the city administration) used to print a "commemoration index" which held a list of historical persons and their commemoration days (i. e. persons, who's day of birth/death was 100, 150, 200... years ago in 2015). Different departments of the city administration have recieved this printed documents as a service from the Vienna City Library. In future, they will not recieve a printed publication any longer, but they will be pointed to a query form on the wiki: https://www.geschichtewiki.wien.gv.at/Spezial:Abfrage_ausf%C3%BChren/Abfrage_Jahrestag%28Person%29

The wiki was implemented by KDZ - Centre for Public Administration Research.