One Laptop per Child

The One Laptop per Child Wiki focuses on children's education, access to networks of collaboration, and access to knowledge in every region, in the local language, and for every age range and subject matter. One Laptop per Child spreads the power of education by equipping children in rural parts of developing countries with connected laptops.

About One Laptop per Child[edit]

One Laptop per Child (OLPC) is a project supported by the Miami-based One Laptop per Child Association (OLPCA) and the Cambridge-based OLPC Foundation (OLPCF), two U.S. non-profit organizations set up to oversee the creation of affordable educational devices for use in the developing world.[3]

The main goal of OLPC is learning about things that are personally meaningful and to encourage the children to extend themselves beyond what they believed they were capable of doing.

As of March 2011, OLPC has produced roughly 2 million XO laptops for children around the world. The majority of these children reside in Uruguay, Peru, Rwanda, Haiti, Mongolia and the United States. All of the laptops run Sugar and Fedora Linux, and have customized software and content builds developed by their national deployment teams in collaboration with OLPC staff.

There are a variety of articles on the OLPC wiki that were created to assist in spreading knowledge about the OLPC project. Some of these articles include information about regions or groups address how they are engaged in these issues, and what current resources and collaborations are available there. Information is also made available about people and institutions address what they are working on in these areas, as well as information about topics, libraries, and websites address what material is available about or from them for the many target audiences. 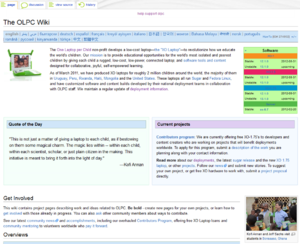 A wiki platform was used to allow for collaborating on project pages and ideas related to OLPC. Using a wiki also allows for a welcoming environment for new contributors or people just trying to gather information about the project. "Be bold - create new pages for your own projects, or learn how to get involved with those already in progress."[4]

There are future plans to further integrate Semantic MediaWiki into the OLPC wiki by utilizing Semantic Maps. The plan is to embed maps with locations of projects/deployments/events and with links to appropriate wiki pages.