OGD Cockpit (Open Government Data Cockpit) is a demonstration site meant to showcase the potential of Semantic MediaWiki in supporting a collaborative effort of interactively putting together a data catalog inside public administrations.

The cities of Bonn and Cologne (Germany) and Linz (Austria) have Open Government Data Initiatives, but they lack the tools to set up an internal data catalog. The current standard is CKAN for an OGD portal, but CKAN lacks the features needed to allow for easy front end data collection, discussing data quality and planning release stages.

In order to put this "proof on concept" into reality, a way of pushing data from SMW to CKAN will be needed, but this can be discussed later on. 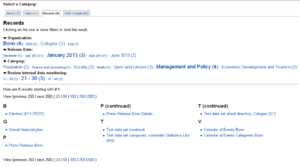 Authorities that have implemented open data portals, or are still in the preparation phase, all face the same problem: after a first - relatively easy to implement in general - phase of the publication of the first data sets, the detection, monitoring and review processes need to be standardized, and transferred from possible (further) data sets into regular operation. The use of conventional tools such as Microsoft Excel or standard web content management systems for this purpose is very limited.

In a joint project of the cities of Bonn, Cologne and Linz, in cooperation with the KDZ - Centre for Management Research, a proof of concept was created, where the possibilities of semantic wikis for the acquisition, representation, maintenance and evaluation of internal data catalog with open source software will be demonstrated.

As a "side effect" of implementing structures in die Wiki for adding datasets including metadata descriptions, the OGD cockpit features a machine readable version of the Austrian standard for OGD metadata: http://www.ogdcockpit.eu/Kategorie:Metadaten 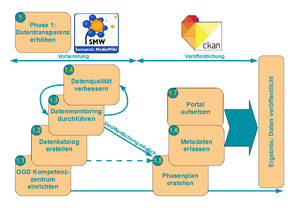 In 2011, KDZ developed a process model for open government on behalf of the City of Vienna; in 2012 it was updated and expanded. An essential part of the process model is internal data monitoring, which makes it possible to use pre-defined criteria to assess how ready a dataset is for publication on an OGD portal.

As the recognition and measurement tool, a simple Excel spreadsheet has been proposed for other administrations to use. Particularly in larger administrative offices, however, the use of spreadsheet programs for an internal data catalog reaches its limits. The software solution CKAN1 aims to support a published OGD portal setup, on which data can be searched and used; but CKAN but does not allow internal administration of data prior to publication. Even the traditional content management systems are suitable only for the detection of a restricted internal data catalog. Source: http://www.kdz.eu/de/open-government-vorgehensmodell