Säsongsmat is a guide to produce and recipes by season. It also works as a repository for data about fruit tree in public spaces, used at e.g. http://fruktkartan.se and in mobile apps.

Säsongsmat's focus is sharing food recipes as well as offering ecological, economical and nutritional information about the each ingredient in the recipe (i.e. when they are available without having been transported around the globe or produced in heated green houses). This wiki is in Swedish only, and is intended for a Scandinavian audience, but it could easily be translated and expanded geographically if people elsewhere are interested.

Seasons are given for different geographic zones, with a special zone, 0, being set when any other zone is set.

The contents is intended to be useful for other sites, apps, etc. Some extra functions are added to the API to make it easier to extract information. 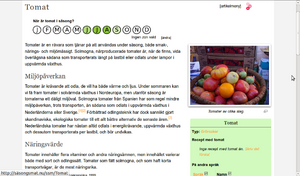 Most data displayed in infoboxes, lists etc, use SMW, to make it easlily accessible by other sites through the API. This includes data drawn from other sites, such as the nutritionaly information, data from UN FAO (the data below the automatically generated svg maps in many articles), etc. This makes it easy to find, say, sources of vitamin E during february, or whatever you can come up with.

As there is no SMW support for durations of time, the seasons are given as a set of days during the year when something is in season, each day given a number from 1 to 366 (for leap years).

Initially, the wiki depended upon a large number of custom extensions, but we now aim at addressing most of our needs using standard functionality of the SMW family of extensions. One of our extensions mw:Extension:SemanticExtraSpecialProperties has since been taked over and much improved by the SMW community.