A database of empirical studies (so far mainly in economics), the availability of replication material for them and of replication studies. It can help teaching replication to students. Seminars at several faculties internationally were already taught for which the information of this database was used. In the starting phase the focus was on some leading journals in economics. Replication results can be published as replication working papers of the University of Göttingen's Center for Statistics. Teaching and providing access to information will raise awareness for the need for replications, provide a basis for research about the reasons why replications so often fail and how this can be changed, and educate future generations of scientists about how to make research replicable. The starting phase of this project was funded by the Institute for New Economic Thinking (INET).

Even though quite a number of researchers have registered, few participate actively. To change this we try to get more students involved and to further expand the database to let it cover a significant part of the empirical literature in economics and other social sciences.
We also need to fix some technical issues, e.g., with the forms we use so far only one replication can be entered for every original study but the most interesting studies get replicated more often. We can display this with a boilerplate but the code is too difficult to understand for most users. We plan to solve this with multiple instance templates and subobjects. There is also a bug with the placement of the slideshow on the main page. And searchability has to be improved significantly because the standard ask form is not user friendly. The semantic drilldown extension allows more intuitive searching but a bug so far makes combined searches difficult,[5] which are pivotal in order to find studies as researchers need it. We are currently trying to get easily clickable properties on each page with category pages that show where else to find the same values like for methods and software used. This already works for authors, keywords, and JEL codes. We are hoping for a cooperation with a software company that offers an improved search. We use the Community portal to keep track of plans for improvement. A relaunch became necessary at the end of 2019 because our software was very outdated and no longer worked with the updated version of PHP on the server. 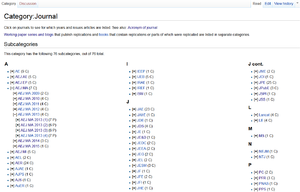 Category Trees serve to display journals with their different issues over the years
Retrieved from "https://www.semantic-mediawiki.org/w/index.php?title=ReplicationWiki&oldid=82993"
Category: