KnowIt is a wiki developed by Johnson & Johnson Pharmaceutical Research & Development, L.L.C to explore the use of Semantic MediaWiki as a knowledge sharing and semantic data integration tool.

The wiki is not available publicly and meant for private use only.

KnowIt is the Semantic MediaWiki wiki of the month for August 2011. 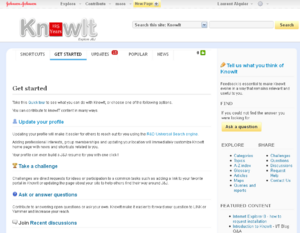 In large, decentralized organizations, useful information about systems, data sources, teams or vendors is too often fragmented in individual silos. For example, scientists who are looking for answers to important questions such as "what are biomarkers for a disease progression in patients over 50 ?" are instead spending a significant part of their time figuring out how to find and access data.

In recent years, wikis have emerged as a good way to capture knowledge in a collaborative way. However, they need to provide more than a collaborative equivalent of a word processor. The content they hold has to be accessible both to individuals and other systems, through queries in addition to search. Semantic MediaWiki provides a good balance of tools to that end.

The goal of KnowIt is to both demonstrate the capabilities of semantic wikis as flexible knowledge stores and serve as a repository of knowledge about Johnson & Johnson.

The wiki started initially around the idea of documenting systems within J&J Pharmaceutical Research & Development, with categories such as applications, databases or servers. It was set up in 2008, with content from previous attempts at a knowledge base dating back to 2002. Quickly it became necessary to capture more contextual information about these systems such as people, organizations, geographic locations or vocabularies. Gradually, the system is turning into a growing encyclopedia of 'common' knowledge within all of Johnson & Johnson.

The choice of 'common' information is both strategic and practical. It allows users to focus on what should be easily shared and keep sensitive material in places where they are already secured. Because of this choice, KnowIt acts as a directory of 'where is what' instead of trying to replicate every piece of information possible. In this context, 'common' information includes categories such as links to internal portals, dictionaries of acronyms, names of teams and external partners.

Given the potential breadth of topics, another key decision was to let user needs drive the type of content made available. This ensures that the content of the wiki is always useful to users and that no extension is made without someone asking for it. 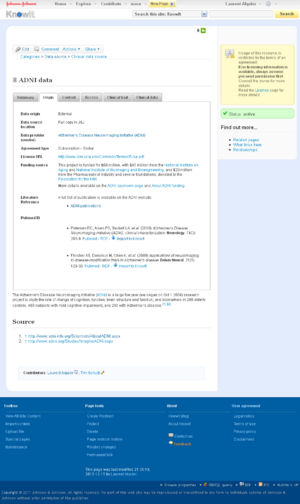 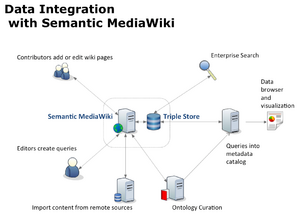 KnowIt makes use of most semantic extensions, such as Semantic Forms to standardize annotations and display of pages, Semantic Results Formats to render queries, or Semantic Maps. Several regular extensions are used as well : External Data to import remote content, the PubMed extension for citations, Replace Text to help with Maintenance, and many more.

The interface relies heavily on jQuery plugins and several customizations to integrate with multiple data sources, simplify navigation and make it as easy as possible to update content.

To facilitate engagement, the wiki also includes social features, such as visible attribution on every page via the Contribution Credits extension, personal profiles with Social Profile, activity streams and 'Thumbs up' or rating buttons, using a custom extension that in turn uses the Thumbs Up jQuery plugin. Extending social capabilities in Semantic MediaWiki is a good illustration of the type of integration issues that can arise working with Semantic MediaWiki. It can be difficult to find an extension that works exactly the way you need it to. The good news is that there are hundred of extensions to choose from and it is relatively easy to find one that behaves very close to what you need and customize it if needed.

Semantic MediaWiki's flexibility allows for a wide range of applications, such as social bookmarking, Q&A forms, glossary or news feeds.

And thanks to its automatic synchronization with a Triple Store, the content of the wiki can be used by other systems. KnowIt is making use of the default RAP Triple Store with the SPARQL Query extension to provide query results in several formats (CSV, XML, JSON).

For example, queries about data sources are used to guide queries to actual content in these data source, and help scientists navigate a complex data landscape. In another application of SPARQL queries, enterprise search is simplified by providing only a subset of new and interesting pages to index instead of crawling the whole server all the time.