Graz Wiki is a wiki that attempts to document the unique architectural heritage of the city of Graz, the second largest city in Austria. The project is part of the Graz initiative "SOKO Altstadt" ("old town social cooperative"), which aims to preserve the city' architectural landmarks. 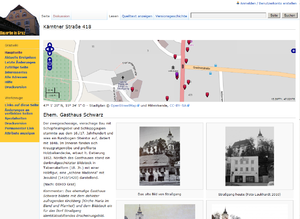 Listing of the building in Kärntner Straße 418

Graz Wiki was started in October 2011 to share the iconic architectural heritage throughout the city. In 1999 the city of Graz was listed as a UNESCO World Cultural Heritage site; that listing was expanded in 2010 to include Eggenberg Palace in Graz.

Graz Wiki was designed to allow people to make contributions to information regarding historic architecture in a collaborative environment with no programming knowledge. The original concept for this wiki was to share the historic architecture of Graz, but the hope is to expand it to other cities, in an effort to assist in keeping track of their developments.

The initial content for Graz Wiki was public information that was collected by the city in 2002, and was added utilizing the XML import feature. A well-known historian assisted in developing the descriptions of the buildings, and provided the imagery used throughout the wiki. A lot of information was added about present as well as past street views.

Graz Wiki is directed towards people who live in and around the city and are interested in architectural development or history, as well as people who are trying to preserve old buildings and are collecting good and bad examples for city development.

SMW is used for displaying the neighbours of any currently-shown building. It is also used for displaying addresses in the city map of buildings that match certain criteria (e.g. modified within the last 10 years, broken down, restored, or just interesting).

Extension "Maps" is used to display the addresses existing in the city (or city center). We are currently searching for programmers who have the expertise in PHP, Semantic MediaWiki and Semantic Maps to make improvements to the code so that it will reload markers when the map is moved. Although we have found some programmers who are trying to make this improvement it is unknown when development will be complete.

A typical page in Graz Wiki represents one street address. You will see the house there with description and pictures of older buildings that were there before if available.

The search window (top right) allows users to search for keywords, but also to search architects (e.g. Hauberrisser), construction periods (e.g. Art Nouveau) or construction details (e.g. arcades). In addition to the displayed map, there are also the following major categories under which one can find buildings: 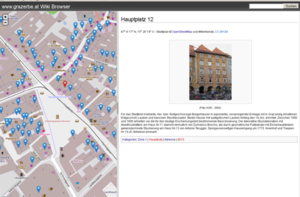 For all that want to really look without concrete target the city, there is already a preview on the future integration of the city map. This feature is still in development, but is available for use.

In Graz there is an old town Protection Act with protective zones. These buildings were collected in 2002 with and taken over with friendlier approval from the "AGIS"-Altstadt Graz Information system.

This overview contains buildings that are worth protecting by the SOKO Old Town, but do not generally lie within the protection zones, which were not thereby extended beyond 80 years

Objects that are under monument protection listed on Wikipedia. These pages offers links to the protected objects of the individual city districts.