Familypedia is a free-to-use public website for genealogy and family history, started in 2004, hosted by Wikia. It began using Semantic MediaWiki in 2009.

Familypedia has several hundred SMW properties, primarily for its pages about individuals. It also uses the SMW-based extensions Semantic Forms and Semantic Drilldown.

Data entry for pages about individuals uses Form:Person for about 80 basic facts, obvious facts such as surname and year of birth, along with less obvious facts of interest for genealogy such as state or province of second marriage, street address of disposal of remains, and the sources of that information. A list of most of the properties available can be seen at http://familypedia.wikia.com/wiki/Forum:Data_entry_without_using_Form:Person.

Ultimately the site should be able to capture any fact that can be found in a GEDCOM file, the standard method of transferring genealogical data between programs and websites. At that stage, and after some questions about how to detect and deal with duplicates are resolved, the site will be able to create pages in a semi-automated way from GEDCOM files, as was done in a rudimentary fashion for a couple of thousand pages by one of the earliest contributors long before SMW was introduced.

A common complaint about simple websites for genealogy (including the pre-2009 Familypedia) is that you have to type or paste a list of children into an individual's page and repeat the process on the spouse's page. Semantic MediaWiki overcomes that and does more. Children's names are listed in a single box on the form for a parent's page and will be automatically displayed on the page for each parent; and for each child who has his or her own page the dates and places of birth and death are automatically displayed in suitable tabular form. Children of different marriages or other liaisons are displayed in separate boxes in spouse order, all with just a single "template:showfacts children". Similarly, a person's siblings are displayed automatically extracted from each parent's page. 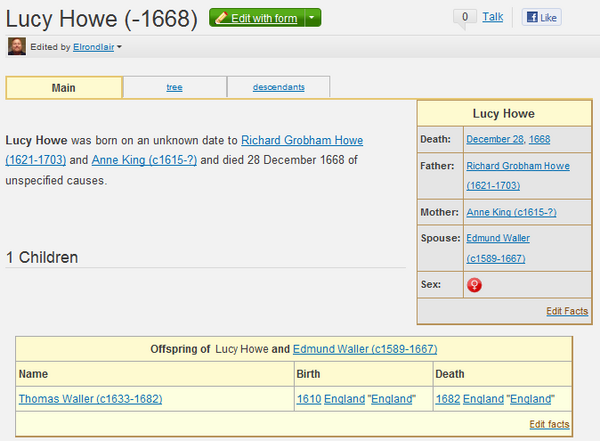 Typical page for an individual

Each page for an individual displays data in several standard groups (needing no further user input):

In about seven clicks one can create two standard subpages automatically showing: 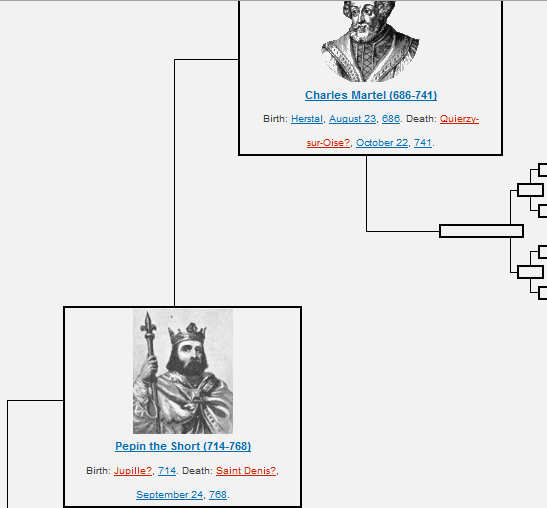 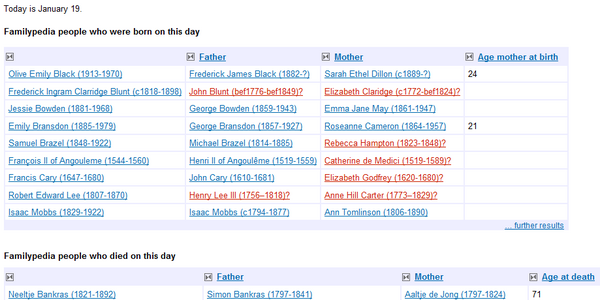 Automatically-generated table of people whose birthday the current day is 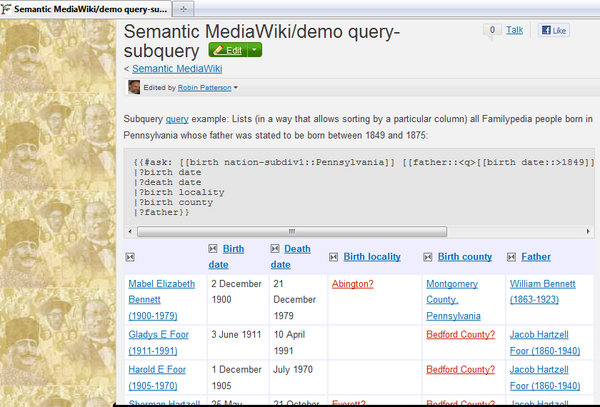 SMW is also used for semantic purposes. Most importantly for a genealogical site, SMW is used to uncover family ties between people. At present, this is automated for married couples -- and the degree of inbreeding of their children is computed. SMW is used to check for descent from key historical figures (e.g., Charlemagne) or ancestry of prominent people. SMW is also used to connect people through places and times, as it supports queries like "show everyone who was born within 10 years and a circle of 10 kilometers of me". This allows for the calculation of population statistics, such as "life expectancy at birth in Scotland in 1621".

A recent innovation allows the addition of a subpage ("/bdm") for any locality or county that shows all individuals recorded as having birth, death, marriage, baptism, or burial there. Some of the same information is tabulated on the front page for events that happened on the current day.

Autocompletion is being gradually extended to thousands of possible placenames that users might want to enter, greatly reducing the time taken to enter data about an individual.

There are about a thousand registered contributors so far (not the 2 million recorded in the official statistics, which include all users of all Wikia sites).

In an average recent month, about 15 registered contributors each made five or more edits and thousands viewed some of the pages. As the number of individuals listed (currently approaching 30,000) increases, the site can expect thousands more more visitors and probably thousands of contributors, because of the ease of working with SMW and the quality and variety of the available displays.

Regrettably, server load is already causing problems for the host. The site's SMW installer did tests to check scalability but may have missed something. A lengthy favorable review in a widely-published genealogy newsletter on 11 November 2010 caused a rush of new users, which overloaded the Wikia system and was followed by a crash and a patch of some sort that was partly unsuccessful. Less expensive templates have been called for. Some simplifications were made in December 2010 but with regrettable loss of some functionality including some of the multilingual interface. SMW enthusiasts are needed urgently.