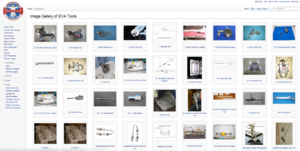 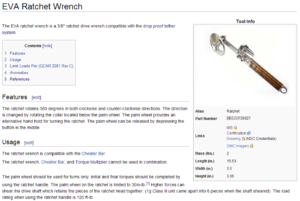 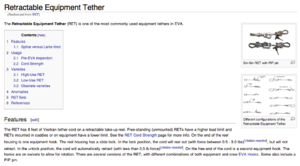 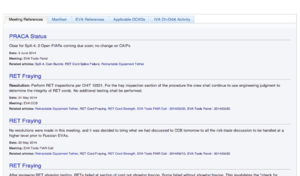 The EVA Wiki is a private wiki used to support operations of the International Space Station at NASA Johnson Space Center. It was created in 2011 to solve the Extravehicular Activity (EVA) group’s knowledge management problem. What started as a side-project quickly grew into the primarily means of recording EVA-related information, and has since spread to several other groups within Flight Operations.

In 2011 the EVA Operations group at NASA JSC had a problem common to many larger enterprises: Information required for employees to do their jobs was fragmented across multiple different sources. The primary file share directories were littered with multiple versions of the same document, the mission-critical servers housed very similar content, some content was on SharePoint, and many other methods of information recording including personal work computers were in use.

In late 2011 several members of the group decided to see if MediaWiki could solve some of these issues. During annual proficiency training, instead of just reviewing the material, this small team imported the information into MediaWiki. When the training was complete a critical mass of information had been imported. The EVA Wiki took off as an unofficial but incredibly useful source of knowledge. By the end of the year it has a relatively large user base and many regular contributors, despite not being an approved project. To get to this point the initial critical mass of knowledge was a necessity, thus creating a product with so much useful content that was so easily accessible that people couldn't help but use it. Once it had that critical mass of content other people found it so useful that it bothered them when they didn't find the information they were looking for on the wiki. This encouraged those people to contribute. Often it started with these new users asking "hey the ABC page doesn't have any info about XYZ...can you add it?" This would generally garner the response: "No, but you can". The wiki had become a much faster and easier-to-use resource for many aspects of EVA Operations.

After installing Semantic Mediawiki, the EVA Wiki really shed light on issues that the EVA Operations group had in their knowledge management system, whether it was identifying holes in knowledge or identifying conflicting sources of data. For example, it quickly identified conflicting information about hardware specifications and rules for operational limitations once they were all accessible in a single-source tool. By using semantic queries to build lists and tables based on hardware, gaps in EVA knowledge were quickly uncovered.

One of the biggest hurdles for the transition to using a wiki is convincing the group to change the way they think. Like many enterprise groups, the EVA group was accustomed to hierarchical data structures and limited their data to the tools they were comfortable with using (standard Office products). Just as important as the technical implementation of a wiki was the cultural transition to “The Wiki Way”:

For the first couple years building the EVA Wiki, whenever the admins asked the question, “Could the wiki do XYZ?” they ended up finding an extension that provided that functionality. Eventually, they ran out of extensions and started learning to develop extensions in order to upgrade existing extensions and create new ones to support the needs of their wiki.

In late 2014 the team noticed that many users were not regularly reviewing changes to pages on the EVA Wiki. The crowdsource accountability model upon which wikis rely was clearly not working. To address this issue the team created Extension:WatchAnalytics, which tracks when people review pages and provides a simpler interface then Special:Watchlist to see what pages have changed. This extension has allowed the EVA Wiki to better ensure accountability and data integrity.

The EVA Operations group includes approximately 50 people, but the greater user group spans hundreds of people beyond just those in the EVA community. Those individuals include astronauts, instructors, flight controllers, flight directors, engineers, and program managers.

By 2014 three other wikis had grown out of the EVA Wiki for other organizations with Flight Operations. Two started from scratch, but one was entirely imported from a SharePoint wiki using a custom-built script (https://github.com/jamesmontalvo3/Sharepoint-to-MediaWiki). By August 2015 there were seven wikis in total.

The EVA Wiki makes extensive use of Semantic MediaWiki to connect missions (Space Shuttle flights, International Space Station expeditions) to EVAs, EVAs to astronauts, astronauts to training personnel, training personnel who are subject matter experts to specific hardware, and hardware to meeting notes. Semantic linking via templates and Semantic Forms makes it nearly effortless to establish connections between related content. The EVA Wiki also makes heavy usage of the HeaderFooter extension to put a generic footer at the bottom of each page, such that any related meeting notes, EVAs, missions, or rules are applicable to the subject.

EVA planning requires the knowledge of hundreds of interdependencies between personnel, hardware, vehicle launch dates, and numerous safety rules. By using Semantic MediaWiki these dependency links can be made throughout the wiki. For example, a team planning an EVA using a new tool that is to be launched on a vehicle 3 months before their scheduled EVA will be automatically notified if that launch date slips within a month of their EVA. Similarly, EVA planners can automatically generate a list of power and hardware inhibits to verify before the crew egress based on which hardware they will encounter and which locations on ISS they will traverse. Before the EVA Wiki, these things had to be caught manually.

In 2014, these developers and admins created Enterprise MediaWiki (enterprisemediawiki.org), an organization aiming to connect organizations using MediaWiki in corporate environments in order to share lessons learned and collaborate on open-source extensions for MediaWiki. This organization co-hosted one event in December 2014 with Chevron, another in June 2015 with NASA, and plans to continue fostering the community.

As more groups from Flight Operations hear about the EVA Wiki, they are requesting to start their own wiki. As of August 2015 there are 7 groups with wikis. Eventually every group will have their own wiki. One of the long-range goals is to enable inter-wiki semantic data transfer, as appropriate based on access restrictions. For example, one group should be responsible for the launch dates of vehicles. As those dates frequently change, every group in Flight Operations depends on the latest schedule. The ideal wiki network would push updates from the wiki with the source of those launch dates to the other groups’ wikis immediately after those revisions are saved.

To facilitate future growth a standardized wiki configuration is needed, as opposed to the separate configurations each of the current wikis have. To address this, the EVA Wiki team has been working on building an all-in-one installation script for CentOS and RedHat called Meza1. This project will allow easy installation on enterprise Linux, including many of the extensions currently being developed such as VisualEditor and Flow. While this project started as a method to standardize the wikis in related to the EVA Wiki, the team hopes other organizations will use it to simplify their wiki installations.

This page in other languages: fr