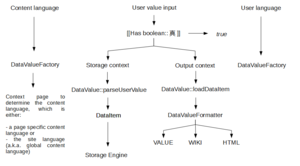 A DataValue represents the user perspective on data which includes input and output specific rules.

The various subclasses of DataValue roughly correspond to the datatypes that a value can have, and they implement the specific behaviour of particular values. In the current architecture, DataValue subclasses implement all functions that are specific to a particular datatype:

Some subclasses of DataValue have additional representations, (e.g. TimeValue to provide an output that is formatted according to ISO 8601. The DataValue class provides different get methods for obtaining different representation, and developers should read the software documentation of that class to understand when to use which method.

A general challenge is that datatypes are very diverse. Many values have an internal structure, e.g. dates have a year, month, and day component, whereas wiki page titles have a namespace identifier, title text, and interwiki component. This diversity makes it hard to treat values as single values of some primitive datatype. For example, in case of a wikipage, the internal representation is a list of values, obtained with different methods to represent the DBKey, Namespace, Interwiki data fragment (e.g. representing wiki pages as strings would not be accurate, since it would be impossible to filter such values by namespace).

There is also a method DataValue::getHash that returns a string that can be used to compare two datavalues without looking at the details of their format.

Another challenge is the diversity of desirable output formats. Users typically want a large number of formatting options that are very specific to certain datatypes, so that it is hard to provide them via a unified interface. Moreover, output is used in MediaWiki both within HTML and within Wikitext contexts, requiring different formatting and treatment of special characters.

The output methods of DataValue reflect some of this diversity, and an additional facility of "output formats" (see DataValue::setOutputFormat) is provided for more fine-grained control to user when a specific output during a query request is sought. But obviously there must be limits of what can be achieved without cluttering the architecture, and users are advised to subclass their own datatype implementations for special formatting.

DataValue objects can be created directly via their own methods, but are required to be constructed using the DataValueFactory.

See also datatype for an explanation of the datatype system.