BASAbaliWiki is a Balinese-English-Indonesian reference dictionary wiki, created to provide resources to strengthen and promote the Balinese language, a minority language in Indonesia that is under stress from the forces of nationalization and globalization. Initially based on an unpublished dictionary written by Fred Eiseman, and already edited by a team of volunteers and professional linguists, the wiki is designed to develop and evolve along with the language. It can be used as a Balinese language reference tool as well as a translation dictionary with Indonesian and English. The wiki launched in Sept. 2014, with interfaces available in English, Balinese, and Indonesian. 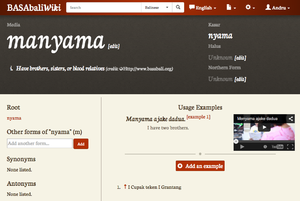 A typical page tries to capture the complexity of Balinese by presenting a root word along with its refined, everyday, and “rough” usage along with regional dialects. Users are invited to add samples sentences extracted from newspapers, song, folktales, blogs and other real word sources to each word along with YouTube videos of native speakers saying the sample sentences (eg. Manyama). Synonyms, antonyms, and word usage notes round out the pages.

The project was started by BASAbali, a 501(c)(3) nonprofit organisation which strives to strengthen the Balinese language, as part of the cultural identity of the Balinese people, as one of the world's linguist gems, and as a model for other minority languages.

Right now, the wiki accessed by a combination of local Balinese, expats in Bali and overseas, Balinese living abroad, and Balinese linguists. We hope to increase the number of people adding data to the wiki and have started a monthly online poetry contest (where the linguist team will enter winning entries into the wiki) as a way of encouraging more active participation.

The wiki uses SMW and a custom extension to support advanced search functionality in English, Balinese and Indonesian, and to link words by their shared roots and conceptual similarities. Sub-objects are used to store definitions and example sentences in all three languages. Semantic Forms provides a way to maintain a consistent data schema without exposing users to MediaWiki template syntax.

The functionality of the SMW and its use for the wiki is tremendous. It is challenging, though, for a lay user to make even small modifications with SMW. Andru Vallance of TinyMighty was responsible for the creation of a custom mobile-responsive skin and extension, and configuration of SMW and Semantic Forms.